Empaths and the Healing Journey

Having helped people on their healing journey for over 11 years now I have seen so many different responses to the work I do. Throughout the years there are people who respond and heal well and there are others who take time to heal. It is always my goal to help the patient the best way I know how and respect the body’s process. You can’t rush healing. Trust me, I have tried. If you have had a health concern for over 5 years it probably started a year or 2 before that. So when trying to correct a 7 year problem it takes time to slow down the dis-eased process and then start going the other way, rebuilding the body with the right alignment or nutrition, for I am a chiropractor who specializes in nutrition.

Sometimes people respond even faster to treatment than I think they would. The body never ceases to amaze me. At other times the healing process can be slower than expected and it is during these times that I often wonder to myself if the person has outside stress that is slowing down the healing process. Some of my most sensitive patients tend to be my slowest healers. When I say sensitive patients I mean sensitive in every way. They tend to be physically sensitive where they don’t recover well if they don’t get enough sleep one night and their whole week is thrown off, feeling tired and maybe even sick. They tend to be chemically sensitive to medication, cleaning supplies and/or perfumes and fragrances. They can also be emotionally sensitive as well. They cry easily at sad movies. They feel like an emotional sponge that if their friend shares with them a story they feel like it happened to them and not necessarily to their friend. They give easily but sometimes give too much and feel drained afterwards. They suffer from fatigue quite often. They can be overwhelmed in crowds and tend to like to recharge their batteries with alone time, especially in nature.

With such sensitivity these people tend to heal slower because their energy is not fully being used to heal but being used else where, pulled in ten different directions at once. I have learned these people are empaths. An empath is a person that is affected by other people's energies, and have an innate ability to intuitively feel and perceive others. Most empaths don't understand that they have this ability and seem to be 'sensitive to others'. It is best to figure out if you are an empath and then learn how to use it as a strength by learning to protect yourself energetically from others' energy. 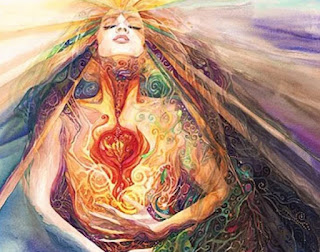 Empaths have a good sixth sense which tells them what is going on under the surface of people’s words and actions. They can sense people’s true intentions. Empaths can trust their gut and that mind-body connection can serve a greater good. That greater good of having a strong mind-body connection is the ability to trust themselves. When centered and focused, they can make clear, healthy, happy decisions. Because they are sensitive they are big-hearted people who can live from the heart with all their love. That is a life well lived.

To know whether or not you may be an empath take the test at empathtest.com

If you are or think you are an empath the following can help:
Nature – While the energies of daily life seem to pull at you and drain you the energy of nature can refuel you and make you feel better. Let it be a walk in nature (especially near water), owning a pet or some plants. It doesn’t have to take much.

Meditation – Is another way to reboot after or before a long day. In meditation, the energy of others tends to be released. A good meditation for empaths is Empath Daily Meditation.


Smudging – You can burn sacred herbs and use the smoke to clear out negative energy that you might have picked up that day. It comes from the Native American culture. Burn Palo Santo or dried sage and move it around your whole body, front and back, using the smoke to clear your energy field, also known as an aura. You can also use Bali Auric Sprays which can be purchased at the office for $25.  Each spray contains a specific crystal formula that carries a certain healing vibration to tune into. They are handmade with organic oils. There is Palo Santo (sacred wood) from Peru, flowers, incense and candles always involved during production and all the production is handled in glass containers. The production process is finished with a special Balinese Ceremony performed by a Balinese Priest to strengthen and to elevate the healing vibration of the sprays.  This ceremony is celebrated under the full moon.

Orgonite – is something to wear or have in the room that is a combination of crystal and metal in resin that takes negative energy and transforms it into positive energy. This transformation of energy is based on Wilhelm Reich’s scientific research. See video here.

Purple plate - These purple metallic plates are made of aluminum where the atoms have been altered so that they are in tune with the basic energy of the Universe- what Tesla called “free energy.” They create a field of positive energy around them that will penetrate any material. The plates help raise the vibration rate of anyone using them.
Posted by Healing Arts at 7:25 PM