The Terror of GMO

Some of my patients have heard of genetically modified foods and some understand that they are harmful to our health while others have heard of it but have limited understanding of their harm, while some patients don't have a clue about it which is okay because that's how our government would like to keep it. I'm writing now to get the word out and make the gray areas more black and white so you can make better health food choices.

I'm going to expose two GMO crops of America now, wheat and soy. America's wheat was genetically modified in the 1970s from a long stalk to a bush with many shorter stalks that created 3 times the amount of wheat gathered per acre of wheat harvest. Sounds great but this genetic modification included 3 times more gluten in the wheat and I believe this to be the cause of all the gluten sensitivities/allergies. 'Heritage wheat' as it is now called is the non-GMO kind which is the type Standard Process harvests when making their wholefoods supplements. Can you believe that? Wheat is the GMO kind and they came up with a new name for the original wheat.

When it comes to GM soy it was fed to rats for 15 months and showed significant changes in their uterus and reproductive cycles, compared to rats fed organic soy or no soy at all confirmed from Jeffery Smith, the director of the Institute of Responsible Technology. Dr. Stanley Ewen, a United Kingdom pathologist, says something in the GM soy was "wrecking" the ovaries and endometrium of the rats and strongly suggested one possible cause is the weed killer used on the beans. Further testing would have to be done to differentiate whether the hormonal problems were coming from the fact that the seeds have been genetically modified or from the fact that they were grown in soil poisoned with glyphosate. Monsanto, however, has a history of not allowing outside testing on their patented seeds.

Where there is GMO soy there is glyphosate. Monsanto's version of glyphosate is called 'roundup' and their genetically modified soybeans are called 'roundup ready'. The seeds have a bacterial gene inserted which allows the plants to survive a normally deadly does of Roundup Herbicide. Jeffery Smith further states that there is so much glyphsate in GM soy beans that when they were first introduced to Europe, the regulatory agencies had to increase their allowable glyphosate residue levels by 200 fold! 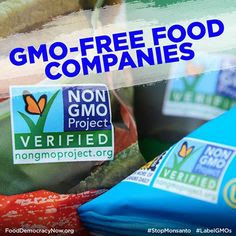 so for right now that is our best bet until Michael Taylor leaves the FDA. He is the Deputy Commissioner for Foods at the FDA and wrote the policy on genetically modified food in 1992. The Policy reads: "The agency is not aware of any information showing that food derived by these new methods differs from other foods in any meaningful or uniform way." This policy remains intact for the past 20 years despite strong vocal opposition from the FDA's own scientists.

Now here's the clincher. Michael Taylor was an attorney at Monsanto prior to writing the FDA policy on GMO's in 1992. He then left the FDA to return to Monsanto in the role of vice president and is now back at the FDA serving as the man in charge of our food safety. Such lack of integrity in government agencies is nothing new but buyer beware!

And JUST LAST WEEK Oregon lost the vote to label GMO foods by 3/4ths of a 0.1% and a recount is being pushed. So people are aware and fighting but we aren't winning yet. So if you know of any ways to support labeling of GMO foods please do not hesitate!
Posted by Healing Arts at 5:46 PM No comments:

Mercury Toxicity and a Must See Video

When patients need to do a mercury detox in my office most of them are aware that mercury is contained in some of the fish we eat and from metallic dental fillings. Mercury is also contained in some of the products we use at home and in schools. And when exposed mercury at high levels can harm the brain, heart, kidneys, lungs, and immune system. When affecting the brain, symptoms may include impairment of vision; disturbances in sensations ("pins and needles" feelings); lack of coordination; impairment of speech, hearing, walking; and muscle weakness. When it is breathed in as a vapor where it is absorbed through the lungs symptoms include tremors, emotional changes, insomnia, weakness, muscle atrophy, twitching, headaches, disturbances in sensations, changes in nerve responses, and performance deficits on tests of cognitive function. All studies that look for mercury toxicity in humans seem to find measurable mercury in most of participants and that both blood and urine mercury levels tend to increase with age.  Scientists have decided that if a mercury blood level is less than 85 micrograms per liter (µg/L) then it is safe but I feel to be truly healthy that the body should have zero mercury in it.

When coal is burned, mercury is released into the environment. Coal-burning power plants are the largest human-caused source of mercury emissions to the air in the United States, accounting for over 40 percent of all domestic human-caused mercury emissions. Burning hazardous wastes, producing chlorine, breaking mercury products, and spilling mercury, as well as the improper treatment and disposal of products or wastes containing mercury, can also release it into the environment. Recycling of mercury-containing products is one of the best ways to help prevent mercury releases to the environment by keeping these products out of landfills and incinerators. We can also contribute by not buying mercury containing products. For a complete list of products that contain mercury you can go to this link of the EPA.

The silver fillings used by dentists to restore teeth are composed of a metal "amalgam" containing roughly 50% elemental mercury and 50% other metals (mostly silver with some tin and copper). Amalgam is one of the most commonly used tooth fillings, and is considered to be a safe, sound, and effective treatment for tooth decay. Amalgam has been the most widely used tooth filling material for decades. It remains popular because it is strong, lasting and low-cost.

Yet the mercury found in amalgam fillings has raised some safety concerns over the years. Amalgam can release small amounts of mercury vapor over time, and patients can absorb these vapors by inhaling or ingesting them. To see a video on how sensitive the amalgam filling is to releasing mercury vapor Click Here.

Unfortunately, according to the Centers for Disease Control and Prevention (CDC), there is little scientific evidence that the health of the vast majority of people with dental amalgam is compromised, nor that removing amalgam fillings has a beneficial effect on health. The Food and Drug Administration (FDA) consumer update on dental amalgam advises, as a precaution, that pregnant women and persons who may have a health condition that makes them more sensitive to mercury exposure should discuss DENTAL TREATMENT options with their health care practitioner.

If you do need to get a cavity filled there are other options you can ask your dentist about that include:

Also you should be aware of the less known sources of mercury that include:

Posted by Healing Arts at 3:29 AM No comments:

The Art of Dry Brushing

After writing last weeks post on Detox Baths patients were asking more questions about dry brushing so here's my answer...in a nutshell, dry brushing is the process of brushing your skin, preferably before a shower or bath with a dry brush.
Why would we want to do that?

Right below your skin is a network of blood vessels, capillaries, fat, and lymph nodes. They are working hard to circulate through the body, but sometimes our lifestyles and the toxins we have stored in our body will hinder our bodies from doing a really good job of circulating those fluids.

Dry brushing will . . .
1) Help drain your lymphatic system
2) Re-Circulate old or stagnant blood
3) Move toxins out of fat cells to be eliminated by the body
4) Exfoliate dead skin

Starting at the feet and legs, use small brisk strokes always moving TOWARDS the heart. Concentrate on areas on the back of the legs and butt as well as areas where your lymphatic system is concentrated such as the groin area, armpits and the glands on the neck. 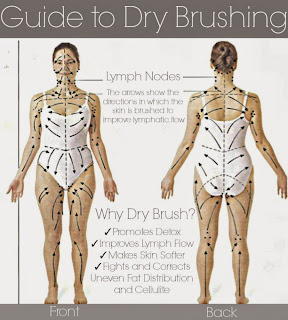 This only takes a few minutes and feels refreshing and rejuvenating, especially in the morning.

You can purchase a dry brush at any drug store for about $5-6 dollars or you can purchase one online. Make sure you get one with a long handle and a medium bristle. Too soft won’t do anything and to hard of a bristle may be too harsh on your skin. Dry brushing is done right before showering or bath and once a day. Make sure you wash your brush once a week with soap and let it dry thoroughly.

Posted by Healing Arts at 4:44 PM No comments: