Oil Pulling with Banyan is the Best!

If you don't know by now, I love oil pulling! It's great for the teeth, gums, immune system, sinuses and lymphatic system. Ayurvedic medicine suggests that sesame seed oil is the best and I agree! But because organic sesame seed oil isn't always easy to find I often suggest organic coconut oil. It's easier to find in grocery stores and a lot of my patients already have it at home, using it for their skin or cooking with it. Click to read more about the benefits of coconut oil.

Sometimes when people are sick I suggest adding a drop or two of oregano oil or clove oil to the oil pulling to make the oil pulling even more potent. Sometimes people complain about the taste of the sesame seed oil or that the coconut oil is hard at first so for better patient compliance I was super excited when I found Banyan Daily Swish. It is an organic oil mix specifically made for oil pulling with not only sesame seed oil but also coconut oil. It also has medicinal herbs in it and spearmint and peppermint oil in it too for a minty fresh mouth! We carry it now in the office for $16 a bottle for about 20 pullings, depending on how big your mouth is!

To read more on the benefits oil pulling, click here. 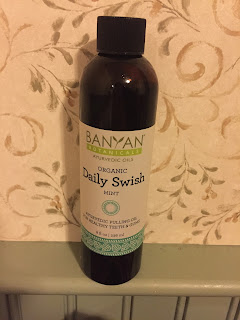